The last three weeks I’ve been working on various projects in the house. The first one I finished off has been on-going since Christmas last year. We bought material and the mechanisms to put up Roman blinds in the lounge. I made the first blind at Easter. Later in the summer I made two more. We have 3 windows and wide patio doors in the lounge so there are a lot of blinds and I don’t have much time for sewing when I am here in Spain. So the two large blinds for the patio doors had to wait until now. It felt good to finally tick off that project from the To do list.

Next on the list was painting the wall behind the TV and media furniture. We agreed on the colour for the wall last time I was here at the end of August. So that we only had to buy the paint and get started. It took the two of us to put up the painter’s tape to create the outline, as we didn’t plan on painting the entire wall. But once that was up I was left to my own devices with the paint. It took 3 layers of paint and some final touching up to get a good finish. But the final results have received much praise.

The original plan was to mount a couple of shelves with invisible mounting on the wall to balance the cupboards on the left hand side. We even bought the shelves and made two holes in the wall trying to get them mounted, but it soon became clear that it was not going to be a success. All the interior walls in the house are stud work and plasterboard. It’s the one thing we regret. It is a real pain trying to fix anything to them. The studs are metal and they seem to be everywhere. So after filling the holes and repainting the wall, enter Plan B. We decided to hang some art work instead.

After pulling out various smaller quilts and not finding anything that really fit the bill I had the idea of slicing up Farbenfroh to make 4 smaller pieces. Despite having 2 attempts to get the whole quilt to hang well (I took off the first binding, retrimmed the edges and bound it a second time) it never did. So although Sqeze was quite shocked that I was prepared to wield the rotary cutter, I had no qualms.

We bought 4 stretched artist canvases here in Xàtiva. I dyed some material to cover the stretched canvases and attach the mini-quilts to. This was the fist time that I had done any dyeing here in Spain. Although I followed a recipe I had used before the finished fabric was quite a bit paler than expected. I don’t know if it’s the different water here, whether the dye powder is getting too old or whether it was because I didn’t wash the fabric before dyeing. Although it is unbleached cotton I suspect the latter may be the cause, but I’ve not done any more dyeing yet to find out.

It was time for the cut! Using my two L-shaped frames cut from a large picture mount I first auditioned the areas that I wanted to use for the 4 smaller quilts. I pinned the areas as I went along to be sure that I didn’t overlap anywhere. After cutting them out, I faced the quilts using the fabric that I had just dyed using the method described by Kathleen Loomis in her tutorial here. Once faced I then took a critical look at each piece. One piece I left alone. On the other three I added some more beading. And on one piece I removed a piece of the sheer fabric that I had sewn to the surface of the original Farbenfroh quilt. I did a small amount of hand quilting on that mini quilt too.

Once I was happy with the four quilts I cut four pieces of fabric large enough to cover the stretched canvases and wrap around the sides and onto the back. I sewed the quilts by hand to each piece of fabric using a backstitch. This was based on information I found here on Leslie Tucker Jenison’s blog. I used backstitch rather than running stitch because I felt the quilt would be less prone to sagging away from the canvas under its own weight. It might be overkill, but I remember learning at school that if you sewed seams by hand to use backstitch and not running stitch for a more secure seam that also looked better.

Finally I mounted the fabric and quilt to the stretched canvas using the method described by Lyric Kinard in her tutorial. I was pleased to have found this tutorial, because I have not had good results in the past with stapling fabric to stretcher bars, even though we do have an electric staple gun. Lyric’s method gives a very neat finish and avoids staples. I wasn’t able to find the really strong fusible web here in Xàtiva (although I didn’t try all the quilt shops). The lighter web did not fuse as well to the wood of the frame as to the canvas, so I helped it along with some textile glue.

The only thing left to do was to mount the four quilts on the wall. That was another joint effort involving much measuring and arithmetic to get them all lined up nicely in a square. We are very pleased with the final result. And I have no regrets about cutting up one of my quilts. How about you? Do you recycle quilts? I’d love to hear from you if you’ve done something similar. Please let me know in the comments! 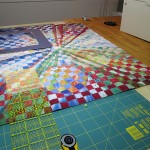 Choosing the areas to use 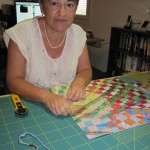 Tidying up the beading 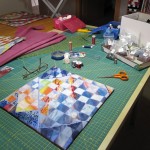 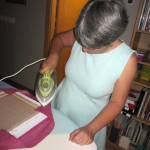 Mounting to the canvas 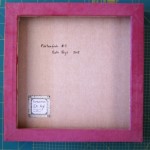 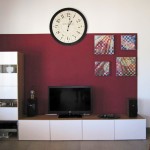 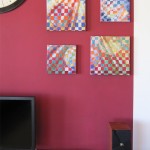 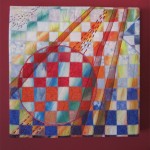 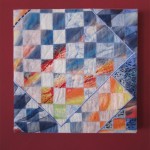 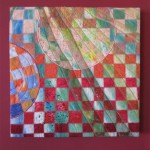 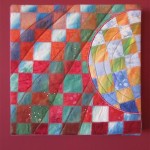