The next exercise was to make our own pattern for foundation piecing based on an architectural theme. I spent a long time choosing an image. It is actually not that easy to find one that can be easily interpreted as foundation piecing. The first problem was with curved lines – tricky to do as foundation piecing – and I had lots of interesting images with curved lines. The next problem was one of complexity. I had an interesting photo of a wall but found it almost impossible to divide the shapes up in some kind of order that could be pieced. The wall had fancy brickwork and open holes in it and none of my lines made for easy piecing. I finally settled on a door. It’s from a photo of a museum in Salamanca that I took mainly for the interesting facade painting. 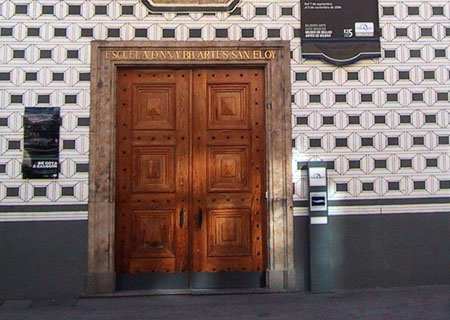 Having made the first little house and seeing for myself that the end is result is a mirror image, I realised that I had the diagonal lines in my pattern going the wrong way. Luckily I had only drawn it in pencil at that point so I was able to correct the mistake. 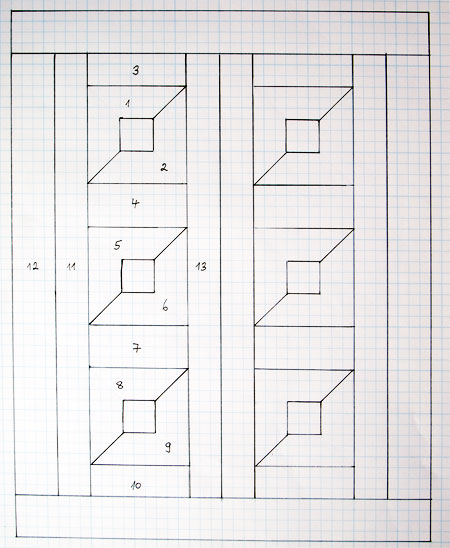 I divided the plan into two halves that I made as two foundation pieced blocks and then sewed together after trimming down to a 1/4 inch seam. The outer two pieces on the top and bottom were done the same way. I trimmed the block and strip pieced the final two pieces. 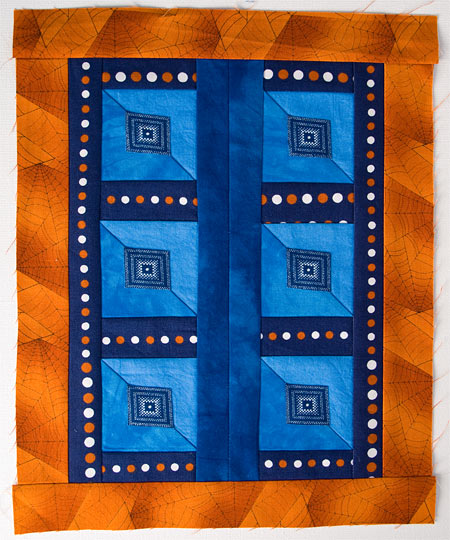 The little “squares” in the centre of the square panels are attached afterwards. I made the foundation with triangles. I had some fabric with a printed diamond design that I decided to use instead of squares, as they are almost square. I thought they added a bit of visual interest too. They are attached with “Wonder under” as they are cut on the cross grain and shouldn’t fray. If I was feeling really keen I could use invisible thread to secure them, but I’m not 🙂 For me they are good enough.