This week a number of things happened. On 6th November Barack Obama was re-elected as President of the United States. On 8th November my used copy of The Uncommon Quilter by Jeanne Wiliamson arrived in the post. Two seemingly unrelated events. There is a connection though. I have been looking for something to keep me creatively occupied here in my flat in Kronberg and bought the book hoping for some inspiration. I had decided that if I can’t sew quilts here, then maybe I could create some journal quilts from paper and other things I have access to here. As the “mother” of journal quilts I hoped her book would give me some ideas.

I like grids in all their variations. I think it is one of the things that attracts me to patchwork and quilting, because traditionally quilts are based mostly on grids. So I have chosen to make my journal based on the theme of grids. Barack Obama’s “Four more years” tweet has become the most retweeted tweet ever. The photo included in the tweet made it onto the cover of the Economist this week: 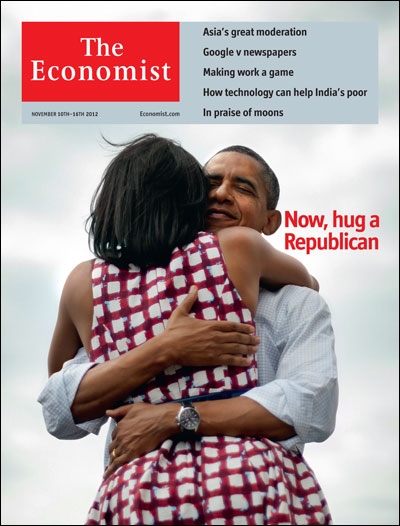 The first thing that caught my eye was the grid pattern on Michelle Obama’s dress. So I decided to use that grid for my first paper journal quilt. I used my aquarelle coloured pencils and my artist’s coloured pencils to make this grid: 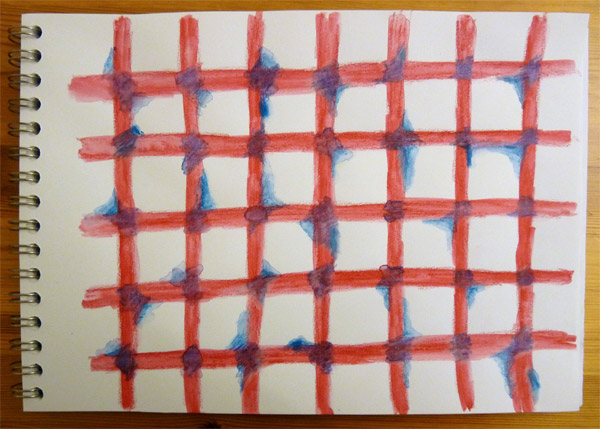 I’ve also started a collection of papers and other bits and pieces that I think may have a use some time in one of my quilts. Let’s see where this idea takes me.

As for the book, I think I would have been a little disappointed if I had paid the full price for it. Most of the book is taken up with step-by-step illustrated instructions on how to make the same journal quilts as Jeanne herself made. I don’t really feel that journal quilts are the type of quilt that someone else really wants to make again for themselves. Having said that, there are enough ideas in the book that I think it was worth buying second hand. That amount of money was well invested.