There wasn’t anything particular that caught my attention in the last week to merit a sketchbook page, so I returned to my roots as it were and made a little patchwork from paper. The design was inspired by quilt patterns that I have seen that remind me of pathways or trails. One was called the Oregon Trail that I found a few years ago now on a website that no longer appears to exist. Another is the blended triangle pattern from Barbara Dieges.

My little paper quilt doesn’t quite form a trail. There wasn’t enough space on a double page and I didn’t have the patience to cut my triangles any smaller, but I am quite pleased anyway with the result. I like traditional quilt blocks, but put together with a twist. I haven’t ever made a full sized bed quilt. I keep thinking I might, but then some other idea takes precedence and the traditional quilt never gets made.

That is actually not quite the truth. The first quilt I ever made was back at the end of the 1970s. I hand pieced a double bed sized quilt using the English paper piecing method and the grandmother’s flower garden pattern. As I’d never seen a patchwork quilt at the time I didn’t know it should have three layers so mine was just lined with curtain lining and didn’t have a proper binding on it. In fact it started out as a single bed quilt, but I got married before I’d finished it so it grew into a double bed quilt. I still have it, but the curtain lining shrank so it doesn’t lie flat any more. Another thing I didn’t know then, was that it’s good idea to wash your fabric first!

So here’s my little paper quilt. I was interested in getting some texture into the pattern by using different images torn from a magazine. The other thing I like is the contrast between dark and light as in the log cabin patchwork block, so I was experimenting with light and dark triangles. 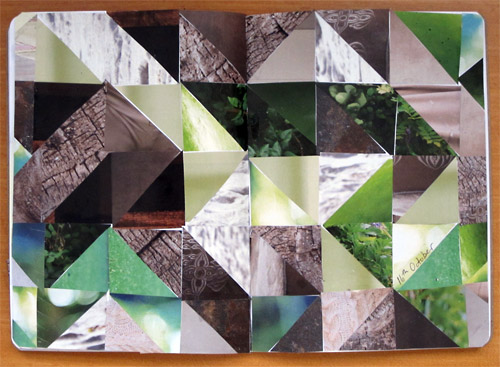