Well my flour paste had longer to dry than intended, thanks to Ryanair cancelling our flight back from Spain on Wednesday due to the general strike in Spain. This is what they had to say in the email they sent out on Tuesday evening:

Unfortunately due to the failure of the Spanish Government to protect non Spanish airline’s flights with minimum service guarantees, Ryanair have been forced to cancel all domestic flights in Spain on 29th Sep and most International flights to/from Spain on 29th Sep.

Hello – what planet are they from? I thought that was the whole idea of strikes, to disrupt things. What did they expect the Spanish government to be able to do about it?

We finally made it home on Saturday afternoon, by coach, having left Valencia on Friday at 10:30 in the morning.

Back to the flour paste – it had dried out so much that it cracked. When I tried to make more marks on the resist it just broke off. After finding that I couldn’t make marks I went ahead and tried printing the crackles. The results were somewhat unexpected. As the cracks were very fine I decided to use Indian ink and just paint it onto the screen with a foam brush. Well hardly anything appeared on the cloth.

So then I thought maybe I needed more pressure to get the ink through the cracks and mixed up some fabric paints to a sludge/grey/purple colour and worked it across the screen with the squeegee. Something started coming through, but only in very small amounts. As I moved the screen across the fabric less and less ink/paint was getting onto the fabric, so I tried washing the screen as I thought maybe the cracks were clogged. This may sound maniacal, but someone else in the class had washed her flour resist screen without detrimental effect.

It wasn’t to be for me – chunks of flour resist started falling off the screen, so I patted it dry and tried some more printing. The flour started getting stuck to the fabric I was trying to print, making bigger and bigger holes in the resist. I made a few more prints on my fabric but felt it was getting too messy with the larger holes. So I gave up and started to clear up and wash up the screen.

While washing the screen the new tape came away completely from the mesh of the screen allowing water and ink/paint to get underneath. There seems to be something about the mesh on my screen that doesn’t like the glue on duct tape. I removed all the tape (yet again!) from the screen. The varnish has protected the wood, so that it wasn’t all soft and didn’t start peeling off in strips – so that, at least, is an improvement 🙂

Anyway back to my printing. I scraped off the excess flour resist from my printed fabric and left it to dry. These are the results: 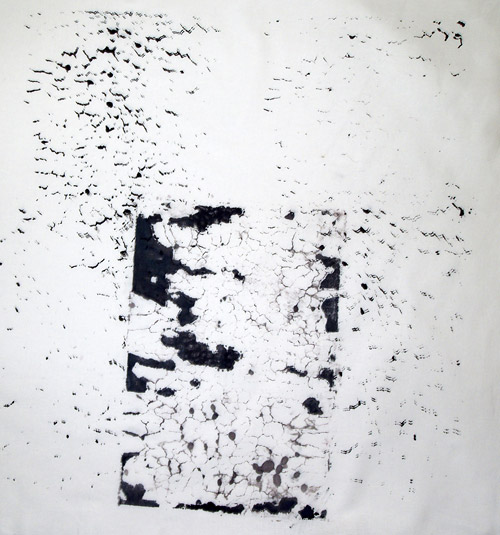 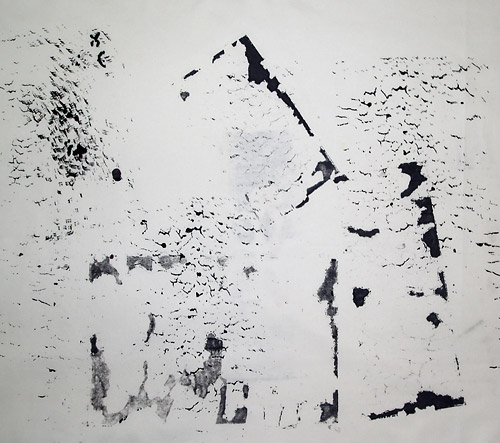 Having recovered from the travel stress and the frustrations with my frame I can look at the results with more detachment. They are actually quite interesting if not quite the effect I was planning on, but I think it was a mistake to make the one diagonal print at the end – still that’s how you learn things. I can’t expect perfection when it’s my first attempt at screen printing!

I shall be adding some more layers of printing. But I need to have a think about what my next image should be to complement (!) my organic crackles and blots. I am toying with the idea of using my design for the freezer paper stencil, recreating it with drawing fluid and screen filler. I have bought those supplies and would like to try it out.

Roll on the weekend, when I get to play again!