I have decided what to do about the quilting on my hexagon spiral. I’ve collected lots of neat quotes about colours and am going to quilt them onto the quilt. It’s not something that I’ve done before so I thought I’d better get some practice in first.

This was my first attempt – a bit wobbly.

The second attempt was better. I fished out my quilting gloves and reread the advice in Heirloom Machine Quilting by Harriet Hargrave. She recommends trying quilting barefoot. It was a bit cold for that, so I left my socks on 🙂 It does seem to make a difference though. I also upped the machine speed a bit. 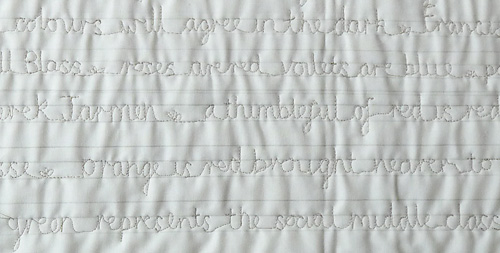 I wasn’t very happy with the Rs though, especially at the end of words. I couldn’t figure a neat way of joining up to the next word without having great loops in between. Back to the internet and more research on handwriting styles. I changed to using cursive script because it always takes the letters back down to the baseline (with a few exceptions such as v and w). After a bit of practice with pencil and paper and tracing over the letters on school worksheets (!) I did some more practice quilting. This time on curved guidelines because I want to quilt along the spirals on the quilt. You can see I wasn’t as focussed today – I got some of the quotes wrong. I’ve been feeling a bit spaced out all day. I did remember to cross all the Ts though, which I didn’t on the previous samples. 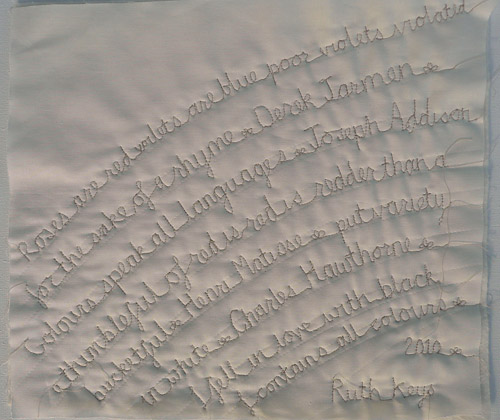 I think the Rs are a big improvement. I changed to using cursive Ss too. 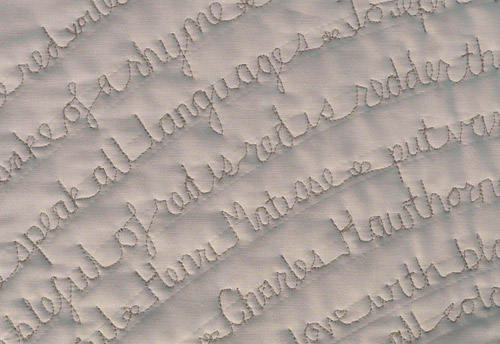 You can see on the last image I’ve changed how I am marking the guidelines too. I didn’t want to have to wash the quilt after I’ve finished all the quilting so using pencil lines or some other kind of marker pen wasn’t an option. I’ve used my dressmaker’s tracing wheel to imprint the guidelines onto the quilt sandwich. I don’t possess a Hera marker, which is the official way of doing it. I think you could use the blunt side of a knife too. I wouldn’t recommend marking up too much at once though, since I don’t think the lines would remain visible for too long if you have to scrunch the quilt up to get it under the harp of your machine.