As the first showing of my quilt in the Text on Textile exhibit at Houston ended today I guess it’s now ok to post a picture of it on my blog. I find it very frustrating as it is always almost impossible to find many good images of the exhibition on the web and it is far too far for me to travel to actually see the exhibition in person. I have much higher priorities at present for spending my money than taking trips to the US. I did find this gallery of photos on the IQF website Quilt Festival at Home. According to my information there were 26 quilts picked for the exhibit, so there are less than half of them shown in the gallery. Also no information about the results of the judging. It would be nice to know which quilt was chosen for the award.

The special exhibits seem to be a bit of a poor relation at the IFQ. Apart from the galleries on the website they receive minimal publicity. At least I’ve found next to nothing by googling. The most information I found was on this blog at chron.com, which appears to be the online presence of the Houston Chronicle newspaper.

So here finally I present Use Your Eyes, my last quilt made before packing up the studio for its move to Spain. 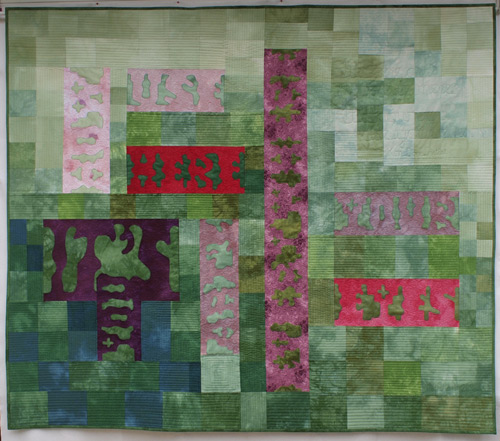 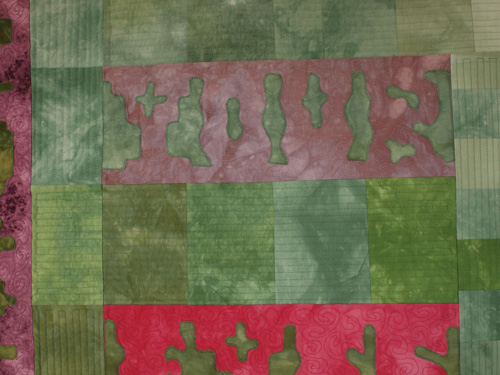 The quilt explores the idea of words as a design element. My inspiration came from reading about Notan, the Japanese concept involving the play and placement of light and dark next to the other. By exploring the balance of the positive and negative shapes in words and reducing the contrast in the shading so that the viewer is uncertain which shape is the positive and which the negative, the text presents a visual challenge. The intention is that at first glance the words should not be instantly recognizable. The challenge to myself as the designer was to use the complementary colors of red and green, but to achieve a balance in the values in each word to support the uncertainty regarding the positive and negative spaces. I chose a favorite quotation by the Australian artist Ken Done for my text and arranged the words as a word cloud giving greater prominence to words that appear more frequently in the source text. The title of the quilt Use Your Eyes is taken from the quote and is meant as an invitation to the viewer to stop and study the quilt and discover the text in the design.

As for my new studio: I was in Spain for 10 days getting back last Wednesday. We were supposed to take possession of the house on the Tuesday, but things didn’t go according to plan. There is still work going on inside the house – bathrooms not finished, painting still to be done etc. We camped in it, in a fairly primitive manner, from the Saturday and poor Sqeze is camping there still. The kitchen was handed over to him on Friday, so at least he will be able to eat more than bread and cheese soon. It will be a while yet before the studio can be commissioned.