The last two weekends I’ve been working on the piecing of the hexagon spirals. The first task was to produce a full sized cartoon on brown parcel paper. Since the sketches were 30 cm square, I decided the easiest was to scale up to a 30 inch square. No complicated maths to do then. I don’t think I’ve mentioned this up to now, but the spacing between the rings on the sketch is based on the Fibonacci number sequence, so I didn’t need any complicated scaling ratio to mess up my figures. 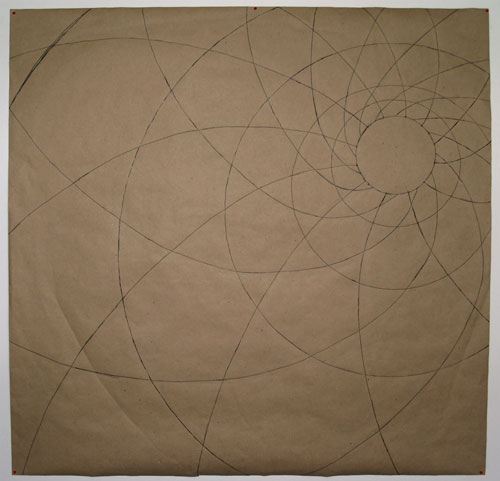 It is always a surprise to see the sketch at its full size. This time the a-ha effect was to see that the inner ring was going to have some small fiddly pieces to sew together. So I decided that for these pieces I would use foundation piecing. At that size no-one is going the notice the difference between a straight seam and a gently curved seam. And of course you can only make straight seams with foundation piecing. I also remembered that you get a mirror image if you’re not careful with this method so I did a bit of sampling using tissue paper and some scraps of fabric. The obvious place to divide up into larger blocks was along the colour spirals. The next two images show the front and back of my foundation piecing sample. 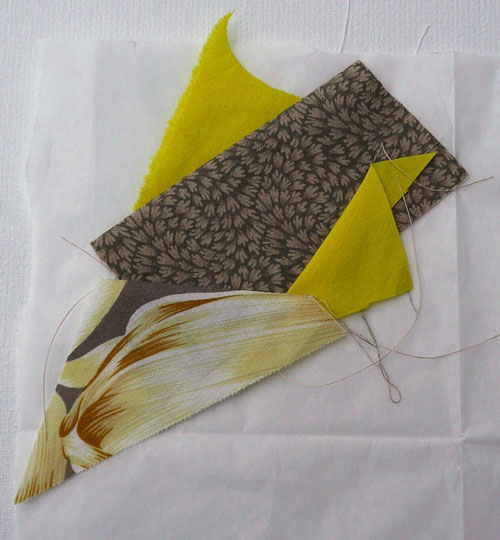 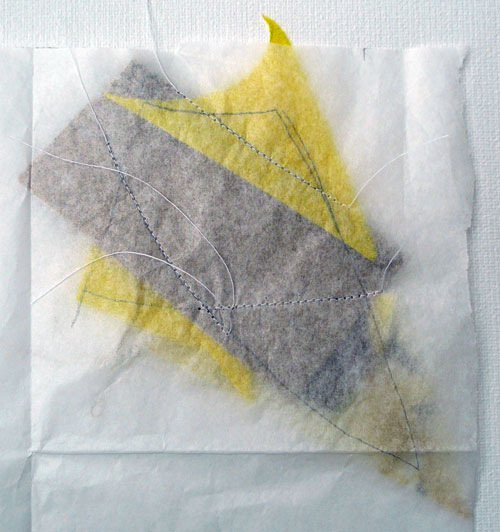 As you can see I was trying to do too much at once. If I had left the bottom piece on the foundation, when doing the piecing for real, I would have ended up with an inserted corner piece to sew together. That might be fine for one piece, but not when you have 12 such seams to sew later. I had forgotten that you need to divide up into rectangular blocks, when using foundation piecing. Shows the value of sampling. Marie was proud of me!

When I started doing the piecing for the quilt top I used “stitch n tear” as the foundation. It is more robust than tissue paper and has the added advantage that it sticks to my design wall. Also it is much easier to remove than paper, which always leaves lots of tiny scraps behind, even after hours with the tweezers. (The first time I did any foundation piecing was on a wall hanging kit that provided paper foundations. I speak from experience 🙂 ) After tracing the foundation from my cartoon, I turned it over and retraced over the lines. This prevents your design turning out as a mirror image. The wrong side (second lot of pencil lines) are the sewing lines for the piecing. I have a white table top so that I was able to see the original lines through the “stitch n tear” with no problem to trace over them again.

The other thing you need to plan in advance is how the seams are going to lie. When you come to sew the blocks together you want the seams to lie in alternate directions so that you can butt them together and get accurate joins. I, of course, only realised half way round the first circle that I had failed to take this into consideration. After some reluctance and a boot to my behind from Sqeze – sorry an appeal to my conscience – I ended up resewing half my blocks to reverse the lie of the seams on them. Like all these things it didn’t take nearly as long as I expected, because most of the construction time is actually thinking and making choices and not sewing. I only had to repeat the sewing part.

Here’s the state of play currently displayed on my design wall. Things may well change once I get started on the next ring out. It is quite tricky to get a pleasing transition across the colours and rings. I may be doing a little tweaking yet. 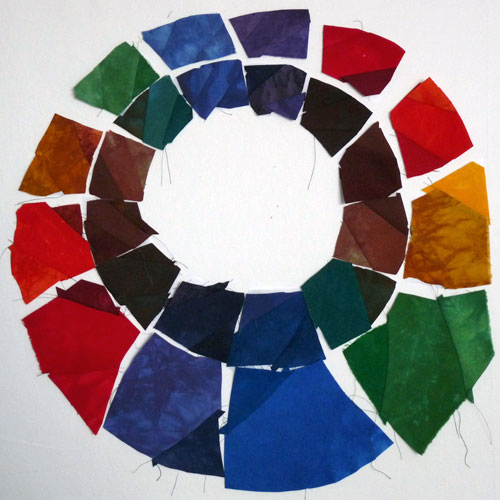 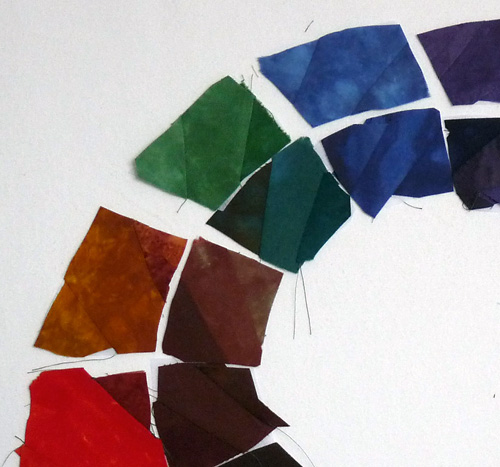 The second ring out is partly constructed using the foundation piecing technique for the smaller blocks. The larger blocks at the bottom of the ring are constructed with normal machine piecing. I’m using tissue paper pattern pieces and a dressmaker’s wheel to mark the fabric as shown in this posting (3rd sampling technique).